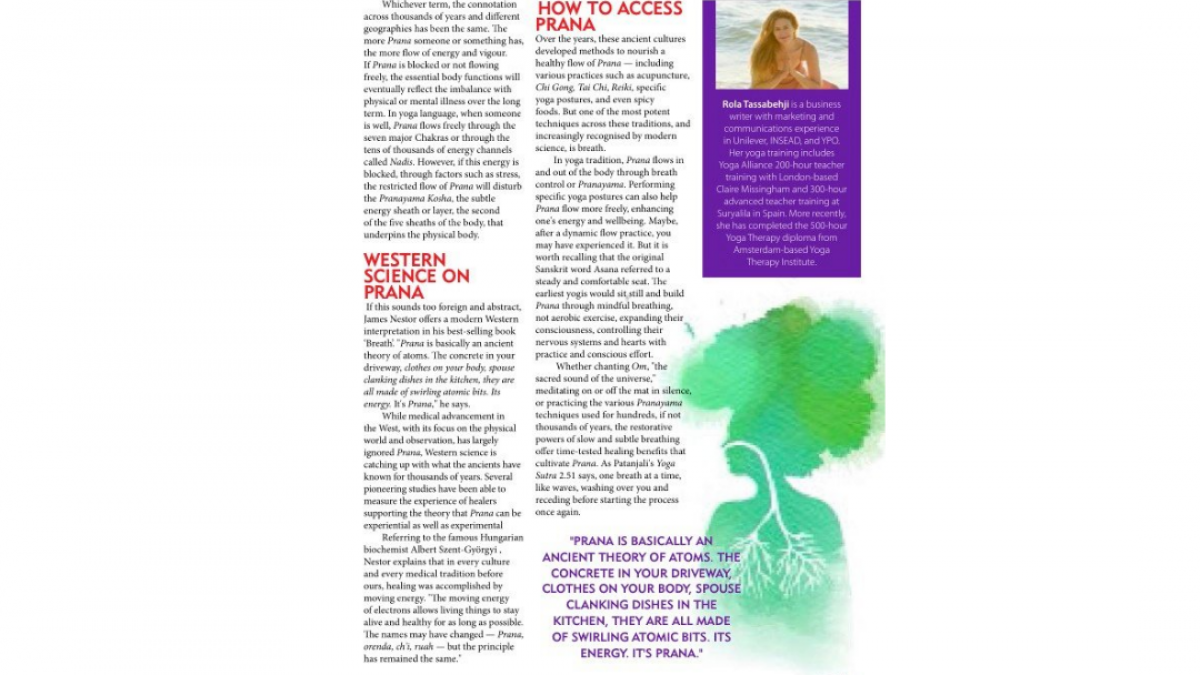 As featured in Yoga Magazine, March 2022

The word Prana is used so sparingly in yoga classes that it might sound like another
ancient concept somehow related to pranayama, breath control, but of no direct
relevance to modern life outside the yoga studio. Yet, chances are, if you practice
yoga regularly, you have already felt the Prana that moves within you — a sensation
associated with greater self-inquiry and connection to your true self and one that you
can tap into with practice and intention.

Defining something you cannot see

Various definitions of Prana exist— including life force, vital energy, the breath of life,
to name a few. Other Western interpretations describe it as vigor, vitality, life, or
spirit. The Sanskrit word, used in ancient Hindu text and yogic philosophy, is
commonly linked to the energy body, which contrasts with the physical body, the
focus of modern Western science. In the yoga tradition, when Prana is flowing freely
through our bodies, we feel a sense of ease and integration with ourselves and the
universe around us.
The concept of Prana as subtle energy for keeping the body healthy and alive has
surfaced in other ancient cultures for thousands of years. In traditional Chinese
Medicine, the body’s fundamental energy is called Chi, while Gong involves the
ability to move and manipulate this vital energy. The Japanese refer to Ki, the
universal energy that runs in and around the human body, as a fundamental source
of wellbeing. Among other cultures, the Greeks refer to Pneuma, Hebrews to Ruah,
and in Islam, a similar word (still widely used in Arabic, my mother tongue), to Ruh’.
Whichever term, the connotation across thousands of years and different
geographies has been the same. The more Prana someone or something has the
more flow of energy and vigor. If Prana is blocked or not flowing freely, the essential
body functions will eventually reflect the imbalance with physical or mental illness
over the long term. In yoga language, when someone is well, Prana flows freely
through the seven major Chakras or through the tens of thousands of energy
channels called Nadis. However, if this energy is blocked, through factors such as
stress, the restricted flow of Prana will disturb the Pranayama Kosha, the subtle
energy sheath or layer, the second of the five sheaths of the body, that underpins the
physical body.

If this sounds too foreign and abstract, James Nestor offers a modern Western
interpretation in his best-selling book Breath. “Prana is basically an ancient theory of
atoms. The concrete in your driveway, clothes on your body, spouse clanking dishes
in the kitchen, they are all made of swirling atomic bits. Its energy. It’s Prana,” he
says.
While medical advancement in the West, with its focus on the physical world and
observation, has largely ignored Prana, Western science is catching up with what the

ancients have known for thousands of years. Several pioneering studies have been
able to measure the experience of healers supporting the theory that Prana can be
experiential as well as experimental
Referring to the famous Hungarian biochemist Albert Szent-Györgyi , Nestor
explains that in every culture and every medical tradition before ours, healing was
accomplished by moving energy. “The moving energy of electrons allows living
things to stay alive and healthy for as long as possible. The names may have
changed — Prana, orenda, ch’i, ruah — but the principle has remained the same.”

Over the years, these ancient cultures developed methods to nourish a healthy flow
of Prana — including various practices such as acupuncture, Chi Gong, Tai Chi,
Reiki, specific yoga postures, and even spicy foods. But one of the most potent
techniques across these traditions, and increasingly recognized by modern science,
is breath.
In yoga tradition, Prana flows in and out of the body through breath control or
Pranayama. Performing specific yoga postures can also help Prana flow more freely,
enhancing one’s energy and wellbeing. Maybe, after a dynamic flow practice, you
may have experienced it. But it is worth recalling that the original Sanskrit word
Asana referred to a steady and comfortable seat. The earliest yogis would sit still
and build Prana through mindful breathing, not aerobic exercise, expanding their
consciousness, controlling their nervous systems and hearts with practice and
conscious effort.
Whether chanting Om, “the sacred sound of the universe,” meditating on or off the
mat in silence, or practicing the various Pranayama techniques used for hundreds, if
not thousands of years, the restorative powers of slow and subtle breathing offer
time-tested healing benefits that cultivate Prana. As Patanjali’s Yoga Sutra 2.51
says, one breath at a time, like waves, washing over you and receding before
starting the process once again.