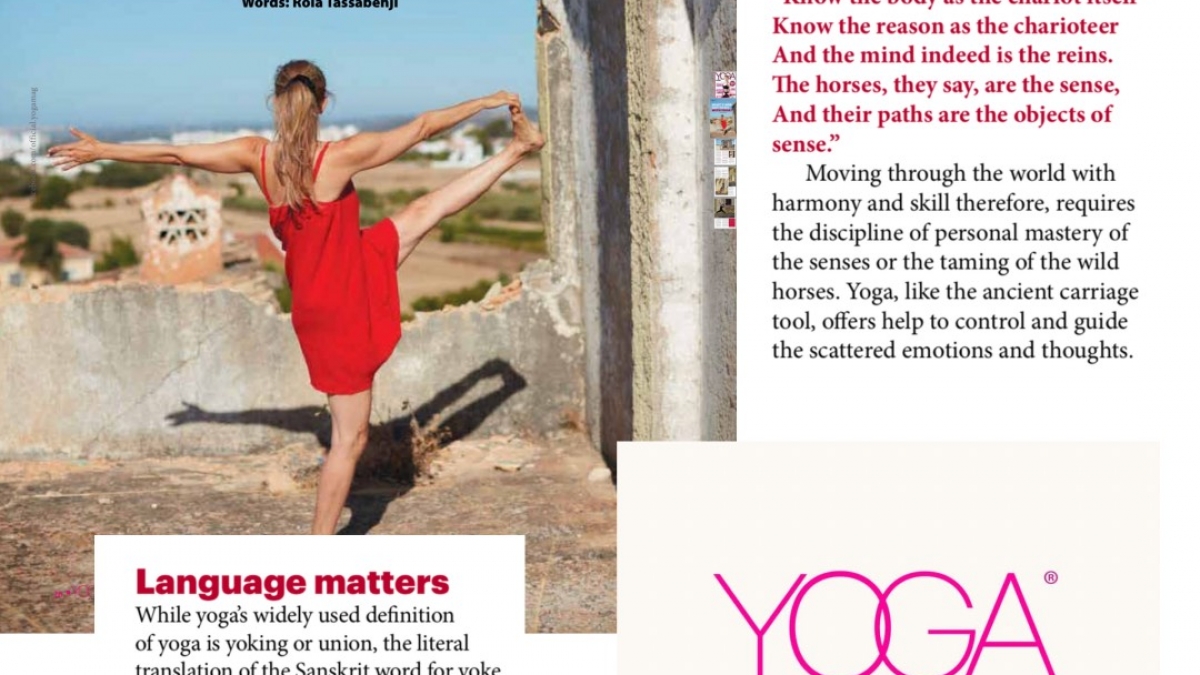 As featured in Yoga Magazine

Anyone who has been to a yoga class is probably familiar with terms like Warrior One, Warrior Two, Breath of Fire, or perhaps heard references to Indian deities related to war and destruction. Yet isn’t yoga all about peace and achieving a relaxed mental and physical state? As a Lebanese diaspora with deep connections to a conflict-ridden Middle East region, I found myself exploring the relevance of a state of war to the yoga practice and its peaceful spirit, and discovered some interesting connections.

While yoga’s widely used definition of yoga is yoking or union, the literal translation of the Sanskrit word for yoke is “yuj” — a physical device used to join cattle or wild horses, often war horses.

The Katha Upanishad, part of the ancient text of Vedas and one of India’s classic texts, makes the first explicit reference to yoga. Dating back to the “pre-classical yoga” period (10,000 BC-500 BC), the Upanishad makes an interesting analogy between taming wild horses and calming our mind. Here is one of my favorite passage (Katha Upanishad, Verse 1.3.3):

“Know the body as the chariot itself

Know the reason as the charioteer

And the mind indeed is the reins.

The horses, they say, are the sense,

And their paths are the objects of sense.”

Moving through the world with harmony and skill therefore requires the discipline of personal mastery of the senses. or the taming of the wild horses. Yoga, like the ancient carriage tool, offers help to control and guide the scattered emotions and thoughts.

Another ancient yoga text, the Mahabharata (thought to have taken place around 3000 BC), deals mainly with war and battle fields. Here, yoga is described as a dynamic activity rather than its current usage as a noun (or adjective, as in yoga pants).

In his commentary of the The Yoga Sutras of Patañjali, author Bryant, Edwin F. says that out ofthe hundreds of references to yoga in the Mahābhārata, “the common denominator of all the epic definitions is disciplined activity.” Rather than the more popular translation of union, I find yoga as an active verb a great inspiration for understanding how yoga works, with commitment and self-discipline.

Yoga as action to meet external threats is further reinforced by the Bhagavad-Gita, considered as a part of the Mahabharata. In the epic poem between a distressed warrior named Arjuna and the Hindu deity Krishna, Krishna counsels Arjuna why he needs to participate in the war against his cousins and elders, offering timeless wisdom to Arjuna and readers alike.

In my early yoga teacher training, I initially found the story confusing and somewhat disturbing. But I later appreciated the bigger lessons of the Gita related to how to approach inevitable conflict in life in general, with sacred duty and disciplined action instead of withdrawal — all the while prioritizing self-mastering and self-knowledge. As Krishna advises in his famous quote, “So sever the ignorant doubt in your heart with the sword of self-knowledge, Arjuna! Observe your discipline arise!”

These ancient learnings on the power of yoga to find inner strength in the face of external threats have survived the test of time. While modern yoga has moved to a more physical practice, its impact remains powerful.

In one pioneering research in Africa,  Project Air. endorsed by the United Nations, the effect of yoga to help vulnerable Rwandan girls and women to heal from trauma was studied. After only two yoga classes, participants regained their appetite and/or slept through the night for the first time in 15 years. An excerpt from the findings reads;:

Furthermore, in Galtung’s famous book, Peace by Peaceful Means the author argues that in a conflict-shattered society, persons cultivating inner peace would be much more capable of bringing about outer peace as well. There is mounting evidence that individual trauma healing can contribute to the peacebuilding and development of healthy communities. More research is needed to explore the use of different yoga techniques in a comprehensive approach to reconciliation, community building as well as trauma healing.

What remains clear is that while external threats — including war, pollution, pandemics, and factors leading to chronic stress — may not be within our control, yoga can provide one tool to cope, and perhaps thrive, by managing the fluctuations of the mind and the senses (the wild horses) while encouraging us to engage with a world based on commonalities.

In your own practice, next time you flow through your Warrior sequence or hear reference of war in a yoga class, take a few extra breaths to listen and understand your body, the way it moves and how it can help focus the fluctuations of the mind. Observe the passing emotions and thoughts, and perhaps you can build upon that warrior strength to bring a sense of peace to those around you.