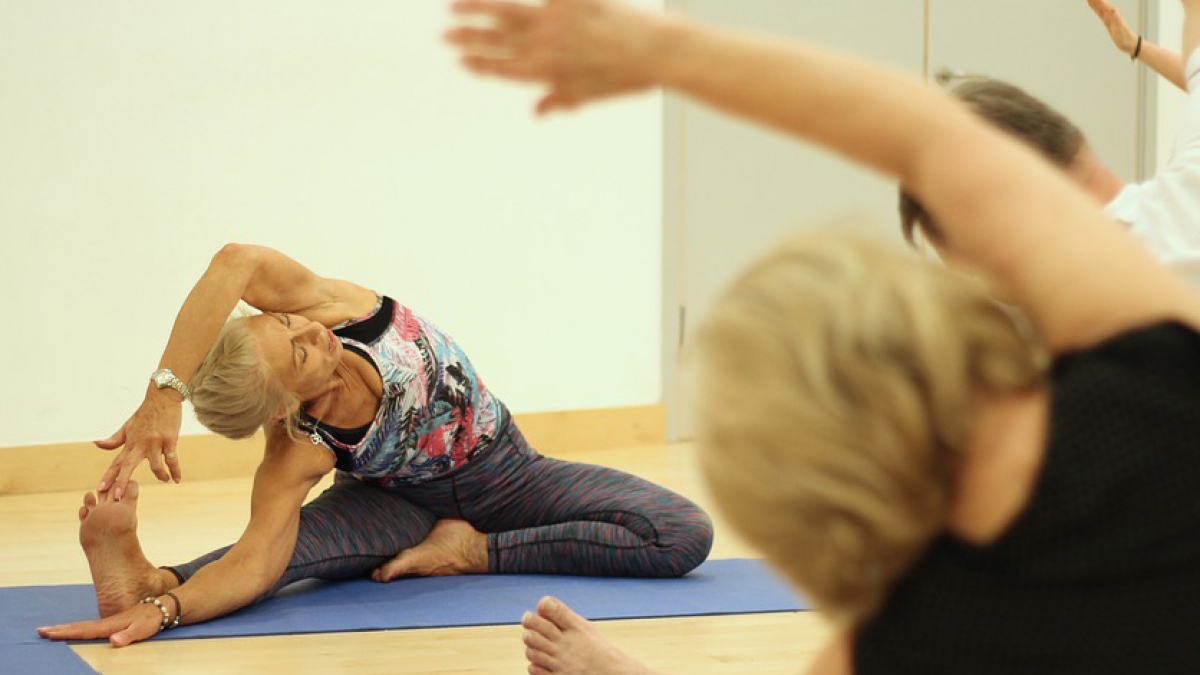 In his book The Happiness Curve, author Jonathan Rauch argues that life satisfaction through adulthood is U-shaped – dipping in our 20s and 30s, then hitting a low in our late 40s before increasing until our 80s. With more people enjoying life after 50, can yoga begin for women during these years or even later in life?

In my own personal life, commited yoga practice and teacher training began well into my forties. I have also witnessed first hand how women especially are embracing yoga for the first time in their later years, often as a result of injury, a desire to find a gentle exercise or to be part of a growing community. Regardless of what triggers it, the tangible and intangible benefits of practicing yoga later in life are increasingly being recognized.

The common issue for men and women as they age is the more frequent aches and pains as the connective tissues become less elastic, leading to greater likelihood of joint injuries. With numerous responsibilities such as caring for elderly relatives, looking after young children or teenagers and managing a full time career, this is also an emotionally vulnerable time for women who by the late forties and early fifties, also typically have to deal with menopause.

Each woman’s experience of menopause is different. But there is general consensus among women health experts that it marks a major life transition or process that involves the time leading up as well as the 12 months after the last period.

After menopause, women further experience a drop in both estrogen and oxytocin (the “love hormone”). The decline of estrogen means postmenopausal bones can become brittle and joints can become stiff. Besides the physical and mental challenges associated with these changes, the stigma of menopause and its physical symptoms often add to a women’s anxiety.

Scientific evidence cited in Yoga Journal confirms that yoga has important elements for all phases of a woman’s life cycle life, particularly for women entering menopause, including releasing chemicals into the bloodstream that bring a sense of well-being and contentment.

Other studies show that conscious breathing is especially useful for managing pre-menopausal symptoms. Simple pranayama with a five second inhalation and five second exhalation for 15 minutes twice a day can cut hot flashes by 44 percent, according to a study in Menopause, the journal of the North American Menopause Society.

The same study shows that inversions can relieve stress and insomnia; twists can relieve fatigue and depression; forward bends help ease irritability and anxiety, with many women finding that their practice evolves into longer-held, sustained poses.

While many of the more experienced yogis is are able to maintain a vigorous dynamic practices well into their sixties, yoga can also work for those who at sixty can’t event touch their toes. Several yoga experts have proven that it is never too late to take up yoga with research evidence showing that it helps with ageing body symptoms including loss of bone density, stiffness, hardening of the arteries, hormonal fluctuations, and mild depression.

Yoga philosophy on women and yoga

A look at yoga philosophy shows a different dimension linking yoga to women’s heath. Classical yoga books, including Hathayoga Pradipika and Patanjali’s Yoga Sutra describe in great detail the physical asanas, confirming that one has to start with the physical and then proceed gradually to the spiritual. But they also confirm the interdependence between body and mind. Unlike physical exercises that are purely external, asanas develop body consciousness and a deeper awareness. It is this combined effect that BKS Iyengar’s makes reference to when years later he claim that “daily practice of yoga will keep old age at bay”.

In terms of gender, while the lineage of yoga goes back to primarily male teachers, a generation of women are now leading yoga’s growth globally and recognizing the feminine element in yoga. In her book, Yoga, A Gem for Women, Geeta Iyenger, daughter of BKS Iyenger, confirms that yoga can be especially useful for women. She lists the three important stages in a women’s life, namely menstruation, pregnancy and delivery, and menopause. With each of these stages, women encounter physical symptoms a result of the imbalance of hormones, as well as the emotional disturbances and loss of “emotional balance”. She adds, “At this juncture, practice of yoga asanas is extremely beneficial, as it calms the nervous system and brings equipoise… it is particularly beneficial to those over 40 when the recuperative power of the body is declining and resistance to illness is weakened.”

Another interesting perspective on the importance of women, and the female energy they represent, to yoga is expressed by renowned teacher of Prana flow yoga, Shiva Rea. In her yoga practice, she sees a need for “more feminine styles because some forms, like ashtanga, are not good for older female bodies.” As women lose their menstrual cycles, she tries to integrate a more balanced practice, calling on “Durga Shakti, the Goddess with ten weapons, for her clarity, her ability to remove obstacles and wake up with fierce energy, and in that waking up, we realize that essential feminine love is what we all need.”

Other western women teachers are taking an even more prominent role in changing the face of yoga. This group of empowered, compassionate, and inspiring yoga women teachers, including Shiva Rea, Sharon Gannon and Seane Corn, have created a strong culture of activism around their yoga teaching. Rea has been involved in environmental and cross-cultural issues, while Gannon’s book on vegetarianism states that she became a yoga teacher because she felt it might provide a platform to speak out for animal rights.

These inspirational and compassionate yoga women activists are living proof of the potential benefits of a committed yoga practice beyond improving women’s physical health and mental well-being. They show that living the yoga way nurtures a conscious connection not only with the inner feminine self and with others, but also with nature and the planet.

For women especially, the late 40s and 50s might be the time when they see the most changes in their bodies and emotions. But it is also a great time to begin the yoga journey and make their health, and connection to the world, a priority.